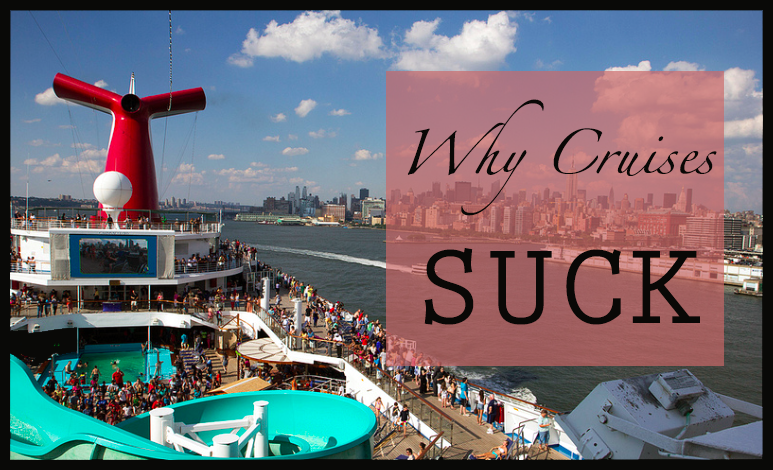 Let me start off by saying I’ve never been on a cruise ship. I’ve heard stories, seen pictures, and understand the appeal, but I have no desire to be on a cruise ship. It seems that, unlike everyone else, I can’t see the luxury others find in a cruise.

The idea of a cruise is great. I love boats, meeting people, and being lazy. To make it all better, a cruise is generally cheap. At face value, you can’t really go wrong. In fact, most people who tell me about their cruise vacations come back ecstatic and rave about the fantastic time they had. The entertainment often consists of comedians, movies, games, and live music leaving you little time to get bored. And after your fun-filled day, you get back to your room to find your towels are folded into cute animals! I’m also told that the food on board is better than good and portioned out well for those on strict diets. How could I be such a scrooge? Who wouldn’t want a vacation like that?

Cruises are marketed as a luxury experience that middle to low-income families and couples can enjoy. As a society, we often feel the need to treat ourselves to perceived luxury. Unfortunately, those providing the great service you experience on cruise ships don’t have that same opportunity. Most cruise ships are staffed by people from impoverished countries like the Philippines and can be paid as little as $400 per month.

These positions are contracted for a period of 6 months or more, and there is no quitting once you take the job. (Alright you can quit, but you have to pay to get home and pay for your time on the boat. The same applies if you get fired. It’s not against the rules, but most can’t afford it.) And while these workers receive free food and accommodations, there are a host of other hidden costs they incur when taking a job on a cruise ship. Workers are required to pay for transportation to and from the cruise ships that they’re scheduled to work on. In some cases cruises won’t even pay for the workers return flight home after completing the job leaving people stranded in foreign lands. These workers are expected to pay for the visas and work permits that are required to work for the cruise company as well as navigate the complex application process on their own. Most cruises spend little effort on actually helping their employees. Taxes, health care, travel insurance, are all just a few more things that the cruise lines have pushed back onto these contract workers. The worst part is that cruise ship workers end up relying heavily on gratuities, yet cruise-goers often feel these are unnecessary since they were promised an “all inclusive” price. While on board, they work for seven days a week doing 10-13 hour shifts to meet the increased demand for luxury onboard cruise ships. They also only make money when they are working on a cruise. Should there be a gap in-between cruises, they can find themselves broke and homeless.

Even if you can ignore the treatment of cruise staff, there’ve been more and more reports of what are affectionately known as, “poop cruises.” Can you imagine being isolated at sea when ALL of the toilets break onboard? Or how about being on a ship with over 600 people puking uncontrollably from a mysterious gastrointestinal illness? Well I suppose you don’t have to if you read the news often enough and those are only the stories that the industry can’t keep quiet. Cruise ships have long been criticized for covering up incidents to protect their image. It’s gone as far as not helping police with abduction, human trafficking, and disappearance cases. Some speculate that they may even aid in covering up crimes to keep any bad press from getting out. If that’s a bit too much of a conspiracy for you to accept, then at least recognize that until recently caught, cruise ships were trying to cover up the criminal amount of pollution they were dumping into the ocean.

Speaking of the environment, cruise ships kill whales? Unfortunately, it’s not a very quick death either. When cruise ships hit whales they tend to become snagged on the ship and are dragged around until death. Some whales are more susceptible to, what is known as a “whale strike,” than others. For instance, this is a major problem for right whales in the Northern Atlantic. They are an endangered baleen whale that happens to move much slower than cruise ships trying to keep their schedule. Apart from the whale strikes, many cruise lines still visit Faroe Islands. These islands celebrate once a year by dragging pilot wales out into shallow water, slicing them open, and letting them bleed to death. Cruise lines have been petitioned to stop visiting the islands so that the island economy wouldn’t be able to benefit from the lucrative tourism, however few cruise lines have bothered to change their routes.

Even if people don’t care about other people, whales, aiding investigations, or the environment, why don’t they care more about their own vacation experience? Cruises can take you to great places without all the hassle of driving or flying, but you don’t really get to experience those wonderful destinations. Cruises are for lazy vacation planners. For example, while I was in Puerto Rico I was traveling with someone who had previously visited Puerto Rico on a cruise. On our trip, we hiked to an isolated waterfall, ate fresh fruit for pennies, had miles of beach to ourselves, went night SUPing, and swam in one of the three bio bays. The last day, we spent a small amount of time prior to flying out in the main city of San Juan. This was the only spot in Puerto Rico that was familiar to my travel companion and it was arguably the least enjoyable part of the trip. The beaches were overcrowded, the food was expensive, and the culture of Puerto Rico was lost. I couldn’t imagine someone thinking they had a good sense of Puerto Rico if they had only jumped off a cruise ship in San Juan.

So again, I don’t see the luxury or enjoyment in cruises. I understand their appeal, but I personally hope to never go on a cruise and wish others would educate themselves about the industry before booking.