I see them in the checkout line every week and it looks as though not a single package has been disturbed since they first showed up. Yes, I am talking about those Birthday M&M’s. I took the leap and bought some, probably the most exciting grocery trip I have taken in awhile, now I want to share with you my feels about these candies.

Packaging – I really love this light blue bag. It stands out and I’ll be honest baby blue is the only color that says birthday. Probably because it was the only color marker I could ever seem to find when making birthday cards as a kid. Too bad blue has been shown to be the least appetizing color for food (source.) 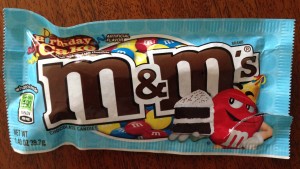 Candy Presentation – I didn’t pay enough attention to the details of the package. If I had I would have realized something very strange. These M&M’s only come in three colors. Red, Blue, and Yellow, that’s right, the primary colors. This totally screams of a test product.

First Taste – It’s a bit of a fat M&M. It really just tastes like a normal M&M but with a lot more size to it.

Mid-taste – Okay, now I’m tasting what can only be a frosting flavor. It’s getting weird actually. It tastes a lot like the cake you get at the store. Well, I suppose it tastes more like the frosting and less like the whole cake.

Aftertaste – Yeah, it tastes like I have some weird chemicals stuck to my teeth. It’s not totally unpleasant as the fake frosting taste is lingering on my breath and burps, but that isn’t also ideal.

Second Look – Okay, so after trying one I had to try eating them a couple different ways. First, I did the logical thing and bit one in half, no extra layers that are visible to the naked eye, just chocolate covered in candy, disappointed. I then tried a mouthful of them to see if maybe that enhanced the experience, it didn’t. It’s really just normal M&M’s with a funky frosting aftertaste. Not bad, but I probably won’t buy more. That said, if you want to try them you should probably get on that since I doubt these will be around much longer.