I love New York and I love the Venture Brothers. If you’re keeping up to date with the show (no spoilers) you might notice an image of New York State and some text fly by in the end credits. Most people probably wouldn’t know what it’s for, but after working for the local Economic Development Center I can spot those logos anywhere. 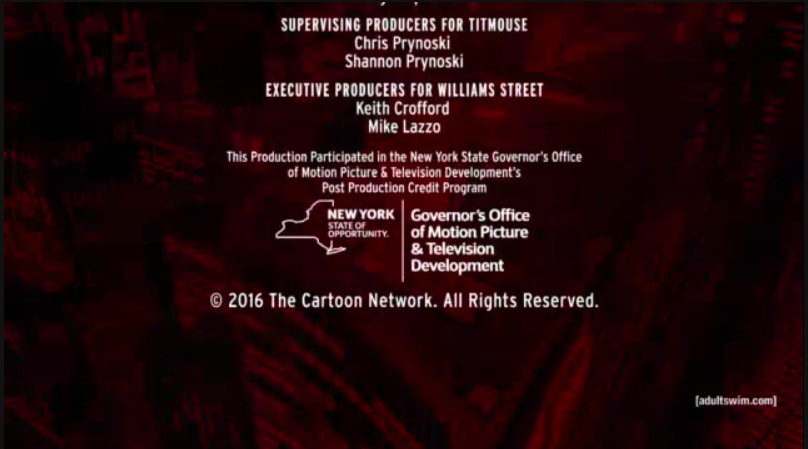 This is the logo for recipients of the Empire Development tax credits.

The Venture Brothers is just one of the many TV shows produced in New York, likely for some of our juicy film credits. The program known as Governor’s Office for Motion Picture & Television Development is part of the Empire State Development program. Empire State Development is an organization tasked with handing out tax credits and exemptions within the state of New York. The logo you see at the end of the credits indicates that the show received some of these incentives.

You might be wondering, what is the reason for this program? Well, a few years back, I attended the Empire State Development annual meeting where they announced that they would shift the majority of tax credits to this exact program. All of the smaller counties in attendance were a bit upset. In general, this program only helps New York City. (On occasion scenes will be filmed in other cities, Spiderman had a shot filmed in Rochester, NY and all of Bruce Almighty was filmed in Buffalo, NY, but it’s more common to see production in NYC.) The intent behind these tax incentives hinges on the idea that the economy of New York is stimulated in the short term by purchases made during production and in the long term by tourism dollars spent  as people visit NY. There may be some truth to the theory that people visit places they are familiar with from TV and movies. The influx of spending on these credits may be the reason for our increased tourism rates in NYC over the past decade.

Getting back to the Venture Brothers, there are a few different tax credits they could be taking part in for this program. The only one mentioned in the credits is the 10% tax credit from post production. In essence, the state government gave them a 10% discount on all qualifying post-production costs. Not bad, but the important thing here is that if you’re a taxpayer in New York State you can take at least a little credit for the continued development of Venture Brothers! You paid for part of it after all.

Hiking behind my house and looking at all the froz